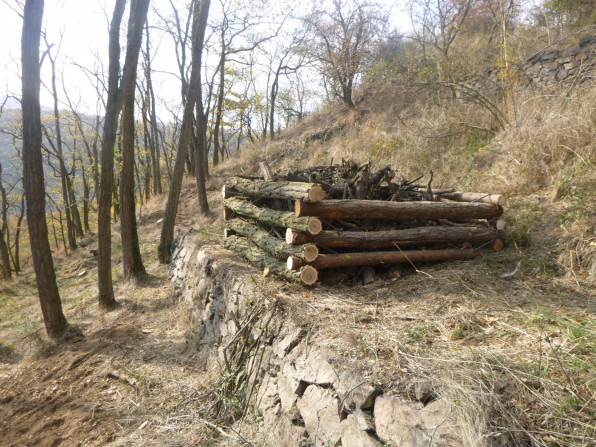 Some sites or species are so specific that they require rather original management measures. Mostly, these measures complement mowing, shrub removal, and grazing. Alternatively, they are part of forest and endangered species management activities. In the České středohoří, the following special measures were applied in the past or are applied at present. The introduction of other measures is being considered.
Building reptile shelters has been taking place in the České středohoří for several years and has proven to have a positive impact on local reptile and amphibian populations. A habitat pile is an artificially built hideaway that serves not only as a shelter from predators, but primarily as a wintering ground for reptiles and amphibians. A habitat pile is built by creating a hollow in the ground and covering it with natural materials such as dry branches, straw, stones, and soil. Thanks to natural insulation, the centre of the habitat pile does not freeze in winter, allowing these animals to successfully survive the winter.
The LIFE České středohoří project includes the protection and support of the target species of green lizard; it inhabited reptile shelters built in the past in its natural habitats. Therefore, the LIFE team continues to build them. This is connected with an awareness-raising campaign. Not only does ignorance endanger the efforts of conservationists, but above all the animals living in reptile shelters. Uninformed people often consider reptile shelters as compost, wood storage or, in worse cases, waste bins and fireplaces.
Controlled burning is an ancient method used by humans to manage the land. At first, people burned whole forests to make fields, meadows, and pastures in their place. Subsequently, fire was used with caution to maintain farmland and forest-free areas. As today, fire has cheaply and easily increased the value of large areas.
Burns were most often done in winter, in some places during the autumn or early spring. However, it was always regularly within specific time ranges. Fire effectively removed old grass and helped to destroy self-seeding woody plants. Burning old grass stripped the soil and the ash subsequently supplied nutrients to it. All this had a positive impact on the support of plant and animal species.
In the České středohoří, regular burns had a positive impact on steppe sites and other thermophilous habitats. Burns were gradually abandoned, largely due to a change in landscape management, but partly also due to incorrectly set nature conservation parameters. Some people came to believe that burns devastate the insect kingdom.
Not long ago, controlled burning was successfully applied to support the eastern pasqueflower population at the Holý vrch site. Unfortunately, even carefully controlled burn is legally problematic. Moreover, especially in dry periods there is a huge risk of fires. The overall neglect of sites also further complicates the application of this traditional method. The previously maintained areas never formed a very thick layer of old grass. Fire burned the area quickly and did not reach high temperatures. Today, in many places the old grass is so abundant that its ignition would lead to the formation of a regular fire burning slowly and at a much higher temperature. This could really threaten everything living on the site. In addition, some experts point out that controlled burning sometimes inappropriately supports competitively stronger species, which is undesirable. Currently, digging up the old grass is more appropriate in every way. In the future, controlled burning may be applied again when it is clear that its effects are positive.
Trampling, a specific method useful where plant and animal species require gentle soil disturbance. Natural erosion causes larger soil disturbance. To a lesser extent, both farm and wild animals helped to disturb the soil. They compacted the ground, tore it up, and loosened it. When moving through the terrain they created bare paths, beneficial for other species. With the decline of grazing, this convenient phenomenon was reduced. The idea has developed from the concept that visitors to certain sites can contribute to subtle disturbances of soil and bare areas. Therefore, every year new routes are marked leading through places evaluated as beneficial to loosen the vegetation and uncover the soil. Tourists have the chance to explore the site in a new and different way than on the established trails, but at the same time they inadvertently perform an enormous service to the countryside with their boots.
The implementation of this method is currently being discussed within the LIFE České středohoří project. It would probably benefit selected sections of the “white slopes phenomena”. However, there are concerns that people will not stick to the trails and will tread the ground where it will not be beneficial. 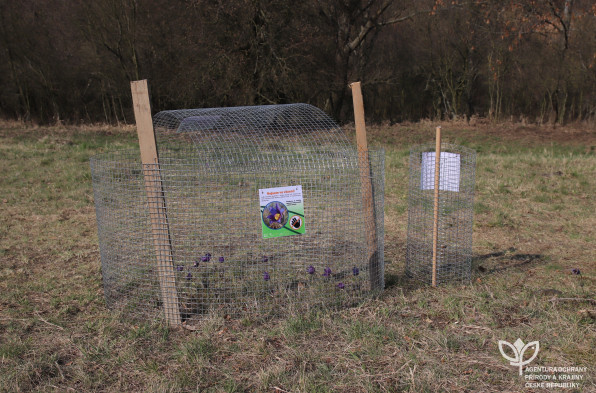 Mechanical disruption of soil and turf is essential for the reproduction of some plants, especially orchids. Seeds of competitively weaker plants germinate on uncovered soil. Greater plant diversity attracts many species of insect, which in addition require disturbed soil for reproduction. In the past, this disturbance was aided by the breeding of large animals, mainly horses and cattle. By their tramping, the animals regularly broke the whole soil and turf. On pastures, farmers themselves carried out harrowing. It disturbed the vegetation, helped germination of new plants and growth, and moved stones.

Horses and cattle are still grazing, and farmers are still using harrows on their land. The problem is that these activities are bound to specific areas and on some they have completely disappeared, which has started to threaten valuable plant and animal populations.

On selected sites, it was again possible to graze purposefully, and in some places animals were replaced by machines. Soil and turf can be disturbed by off-road vehicles and motorbikes, sometimes even by military equipment. In the České středohoří, these activities are used at Babiny, where they contribute to support not only endangered orchid species, but also help to create pools where many endangered amphibians thrive as well as a rare crustacean, the tadpole shrimp.

Mulching and woodchipping have recently become very popular, mainly because of financial support and good purchase prices. Both methods have often helped in clearing sites overrun with self-seeding woody plants. The methods are reliable if they are carried out with consideration and the material is removed from the site. This was the case at project sites. Unfortunately, elsewhere there was over-exploitation of stands, which destroyed a number of Central Bohemian Upland orchards in the České středohoří. The mulchers and woodchippers often became fatal for a number of living creatures, and in some cases the leftover layer of woodchips and mulch suffocated valuable plants.