(Lacerta viridis)If you behave quietly in the countryside, you may be able to see these beauties. The green lizard occurs only in the warmest areas of our country. Females are brownish to green, with darker spots along two yellowish stripes on the sides of the back. Adult males are usually green, but in the mating season they are characterized by a glowing, turquoise-coloured throat. People often do not even know that such an exotic-looking reptile lives here. That is also why this critically endangered species has become a symbol of the whole project. 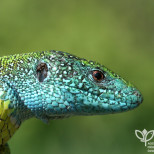 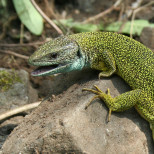 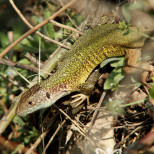 Brightly coloured, up to more than thirty centimetres long, the lizard can give the impression that it has escaped from a terrarium or arrived from the south in a shipment of tropical fruits. Yet in the 1950s the green lizard population in large Czech river gorges was quite numerous. In the České středohoří, the occurrence of green lizard is currently known only on two sites in the Elbe River gorge - Dolní Zálezly and Kalvárie.

This green beauty with an elongated head, rounded body, and long slender tail needs warm steppe areas with patches of rocks or stone walls, where it finds a safe hiding place in the joints. As for its food, the green lizard is not demanding - it enjoys a variety of insects in all its developmental stages and does not say no to earthworms or small reptiles either. When hunting, it mainly uses a waiting strategy and is able to catch flying insects. The mating season starts at the end of April and can last through the whole of May. In this period, there are dramatic battles between males. Between June and July, the female lays between 5 and 20 whitish eggs, and the young hatch in August and September. It spends the winter in ground shelters and rock crevices, but also in tree cavities.

The green lizard is losing suitable places to live. The old orchards and vineyards on the slopes of the valley are overgrowing with shrubs and self-seeding woody plants that shade the lizard's home and thus cool it down. However, lizard populations can also be endangered by bad weather or lack of shelter from predators.

The most common practice at the sites on the České středohoří is clearing shrubs and self-seeding woody plants, as well as clearing vegetation from old dry-stone walls which are the remnants of former vineyards and orchards. Special "lizard houses”, so called reptile shelters, are built as well. In them, green lizards find safe refuge from predators and suitable places for wintering.