(Stipa zalesskii)Even at first glance, this speargrass species is an extremely interesting plant. This critically endangered steppe grass of the Poaceae family grows up to 90 cm. From a distance, the fields of the grass swaying in the wind resemble a silver rippling sea. 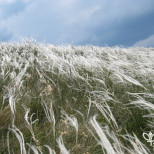 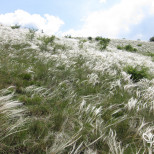 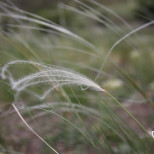 This very rare steppe plant has a distribution centre in the south-eastern part of Russia, Kazakhstan, and the southwest part of Siberia. In Bohemia, it occurs exclusively on the steppes of the Louny and central parts of the České středohoří. Within the project sites, we can observe its population mainly at Kostelní vrch. It also grows on the hills of Deblík, Oblík, Brník, and Holý vrch near Sutom. Its occurrence is bound to the very warm, southern slopes of rocky steppes.

Stipa zalesskii often grows together with other speargrass species. They thrive on the sunny slopes of the hills of volcanic origin. Here they create so called speargrass steppes, resembling a silver rippling sea.

Its seed is made up of a caryopsis (about 1 cm long) with a very long hairy awn (10-40 cm). The lower part of the awn above the caryopsis spirals gradually during ripening. After ripening, the caryopsis is released and, thanks to the long, hairy awn, is carried away from the mother plant in the wind. After hitting the ground, thanks to the spiral part of the awn it is gradually literally "drilled” into the ground.

Stipa zalesskii is endangered by the overgrowth of steppes by competitively stronger plants, but also by people who like to pick the decorative speargrass for bouquets. The isolated populations at Deblík and Kostelní vrch, situated on a bare steppe, are endangered by the rooting of pigs and overgrowth by expansive species.

Apart from Deblík, the speargrass sites do not yet require regular management. There is irregular grazing at Oblík; if necessary it is possible to gently remove the self-seeding plants. Mechanical removal of competing species proved to be successful at Deblík. The need for more radical intervention, such as fencing of the site, will depend on further development of the population. Generally, all speargrass species benefit from clearing of self-seeding plants which overgrow their natural habitats. Grazing herds of sheep will take care of competitive plants because sheep avoid speargrass due to its sharp and stiff leaves. Thus, they strengthen the position of speargrass in the battle of species.