(Cypripedium calceolus)Bílé stráně near Litoměřice is one of the few places where this severely endangered plant thrives. To survive in the České středohoří , lady’s slipper orchid needs broadleaved dry grasslands and the presence of symbiotic fungi in the soil. There are usually 1 - 2 flowers on the caulis, which first bloom after 16 years. It is thanks to its flower that the lady’s slipper orchid is so attractive. Its shape resembles not only a lady’s shoe but also tropical orchid species. 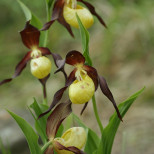 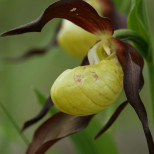 The homeland of this orchid is Central and Northern Europe, from which it spread across Western Asia and the Caucasus to Mongolia, China, and Japan. It grows on a small scale in the Czech Republic, in about one hundred places. Lady's slipper orchid is a perennial plant that can live for several decades. It prefers slightly moist soils which dry out during the summer. It requires alkaline soils with a high calcium content. It thrives in semi-shade, but can also be found in sunny locations. In forests, it usually grows in places with sparse herb undergrowth.

The flower is not only an attraction, but its lower part acts as a sophisticated trap. For most orchids, pollination is performed only by specialized pollinator species. With lady's slipper orchid, these are the solitary mining bees. The insect is attracted, sits on the edge of the opening and slips into the inside of the lip. It cannot get back due to the excreted slippery substances and the backward bent hair. After many unsuccessful escape attempts, it tries to pass through a very narrow slit near the base of the lip where the stamens and pistil are placed. As the bee tries to pass through the narrow opening, the sticky pollen adheres to its back as it travels out. If an insect visits another lady's slipper orchid flower, pollination can happen. Lady's slipper orchid reproduces with very small seeds, or with the growth of clumps using underground rhizomes. Seed germination cannot happen without symbiotic fungi in the soil (so-called mycorrhiza).

In forests, lady's slipper orchid does not like too much shade or, in contrast, clearance management, which leads to a sudden change in light and humidity conditions. Too early or double mowing of meadows does not suit it either. Plants can also be damaged by animals biting or burrowing and digging. In some places, soil is also contaminated with chemicals. The beauty of this plant is often fatal to it. Greedy gardeners often tear up clumps of the orchid and take the seed capsules. However, due to the specific conditions required by the orchid, they have no chance of success.

Lady's slipper orchid is a highly endangered species, defended by international conventions. In forests it requires sensitive thinning and allowing more light into existing stands, clearing of shrubs and self-seeding woody plants. Meadow and steppe habitats, which are less common than forest ones, are mowed only after the seeds have ripened, grazed by sheep, or old grass is dug out of them.